The adventures of one very lucky hound

Yet Another Way to Keep Cool

Over the weekend the Tofugreyhound discovered yet another way to cool down as the mercury rises. He was walking along one of his favourite cafe strips and discovered doggy icecream.

For four dollars he had a cup of ‘doggy icecream’ complete with a biscuit bone stuck in, like a wafer in a  human icecream. Needless to say he was very excited when his cold treat arrived.

It took him longer to finish than us humans took to eat our breakfast, which is a seriously long lasting treat! He was also the object of much canine jealousy as greedy eyes glued to him as hounds walked past icecreamless.

I attempted to get a nice photo of doggy icecream in action, but the Tofugreyhound would not stay still long enough. (see blur below). The doggy icecream came from Copenhagen on Brighton Jetty Road, I have no idea if it is regular or if any other stores sell it too. 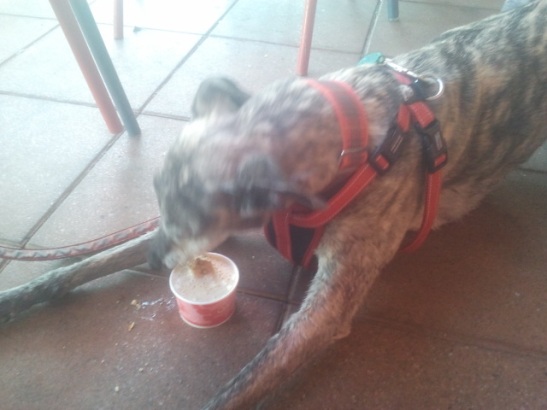 This entry was posted on January 13, 2016 by tofugreyhound in Uncategorized.